What I noticed this month by Heather:

As the seasons shift, so do we. The changes in the Seeds group are pronounced now as we make the best of wintry conditions. There is no end to what we can discover at any time of year, and the change in how the children see the land and ask questions about their surroundings have become deeper and more meaningful. What will their aptitude for learning do when spring comes around and life peeps around every corner? Friendship, teamwork, empathy and creative problem solving are some of the social skills they’ve developed, through the daily tasks they set out to accomplish and through group dynamics that uniquely arise in outdoor settings.Group decision making, voting and consensus are skills practised and understood too. I am so excited to see where we go from here!

What I noticed this month by Alix:

We have officially reached the halfway mark in our school year, and it is an excellent time to reflect on the progress we’ve made so far. I hope that you have seen development in your young ones since we started down this path in September. Here at Hand-In-Hand, we have witnessed social skills develop through coming together as a group, as well as through creating new friendships. We have seen physical literacy improve by navigating challenging terrain in sometimes challenging conditions. We have seen children develop respect for each other, the environment and themselves, and watched as they have taken their self-care more and more into their own hands. Pre-reading and maths skills have been developing too, just by observing what happens around us, as well as through books and activities. This and so much more – it has been a busy 5 months!! Thank you for sharing your children with us!

Despite an onslaught of wild weather and a forest floor bare of lively plant action, we found lots of interesting bits and pieces to keep our gears turning. Melting snow exposed some interesting scat and bones! Questions were raised, theories tested and outcomes reached. Curiosity never stops, even when the growing season is on hold.

In our new classroom found by Torin, a beaver jaw was found. This led to many explorations of other animals’ bones, including their teeth and jaws. Looking closely with magnifying glasses and talking with teachers and students many for endless inquiries. We even studied and compared our findings with human bodies and bones. 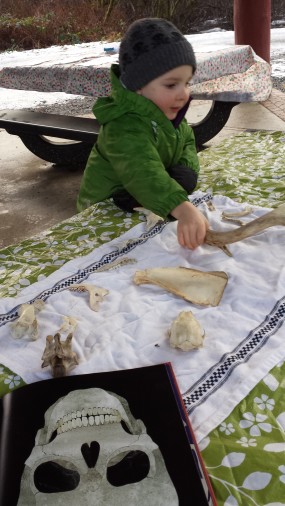 Zachary wonders if the antler is a bone. Later he had a conversation with a forest friend who highlighted which bones were from some animals he knew. When friends teach friends it is knowledge sharing but from a less top-down structure and children listen differently to each other. They realize that if their friend can remember some facts, that they can too! 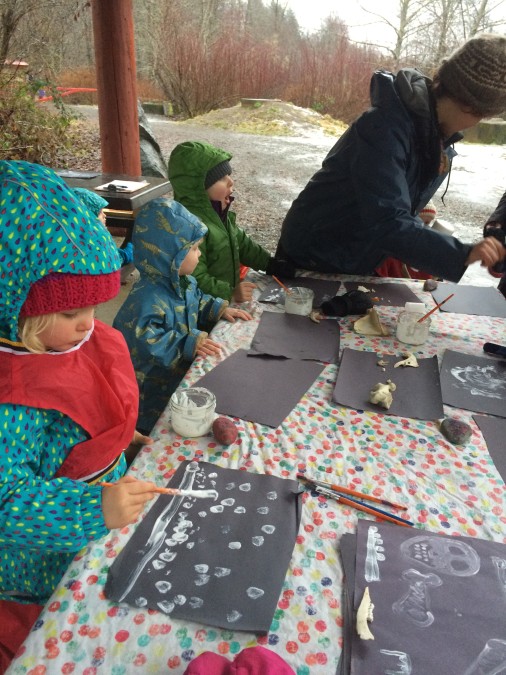 Sometime though, we just like to paint what we want! Poppy looked at the bones but made a decision to do a snowy scene instead. 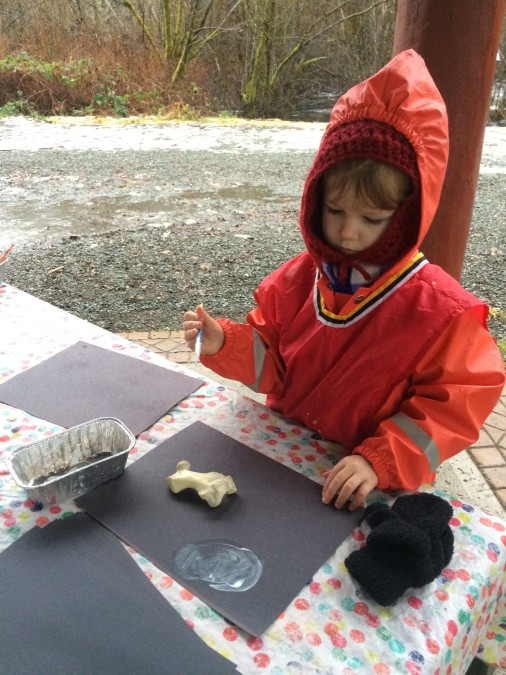 Nova is working on painting what the bones looks like using hit paint on a black background. Simply controlling your paintbrush to show a circle rather than a bunch of scribbly lines shows development of image and symbol development and understanding.

Teamwork was another effort the children seemed to be making more strongly than ever this month. From clearer communication and inclusion to fort building and helping push the wagon, the kids are working well together. 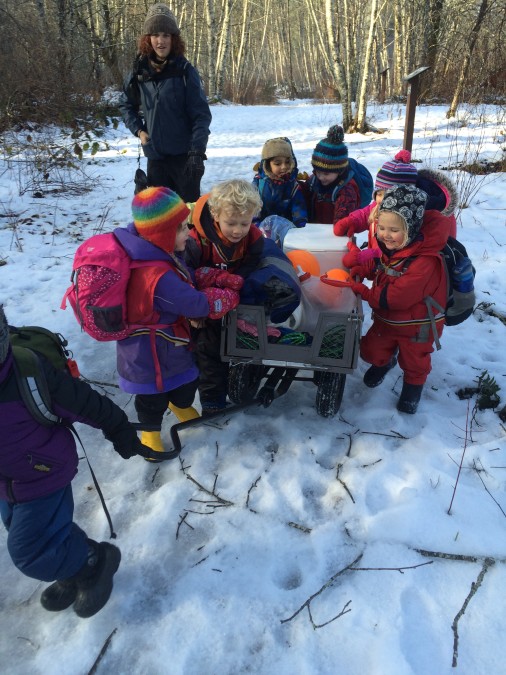 Working together to push the wagon through the slush. They did it! It was quite a feat. Everyone was pushing hard and had a place, including steering! 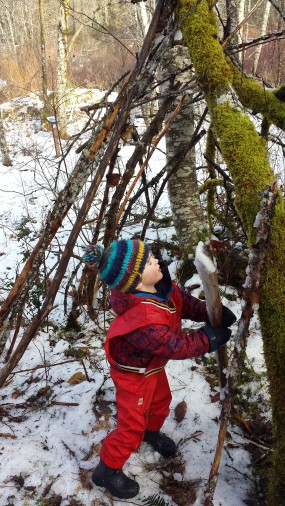 Torin worked on this fort ceaselessly overtime we visited this classroom. He took pride in guiding others on where to put sticks and finding his own long ones. 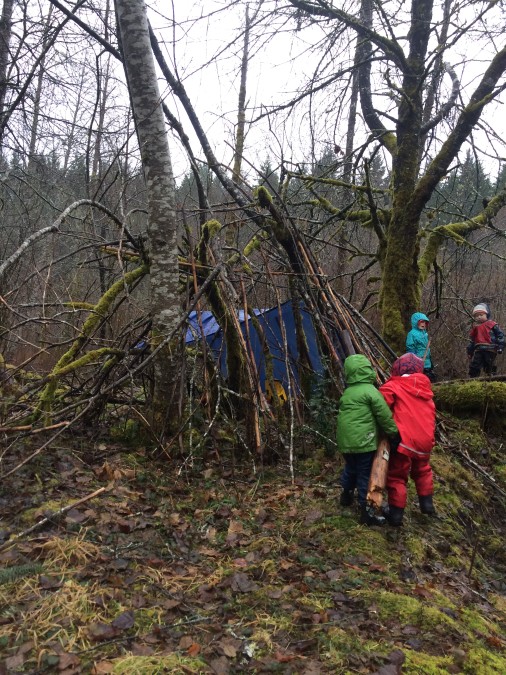 Enlisting others to help you carry and deposit sticks, and logs, was another thing teacher observed. Tasks are shared or divided up amongst the friends. 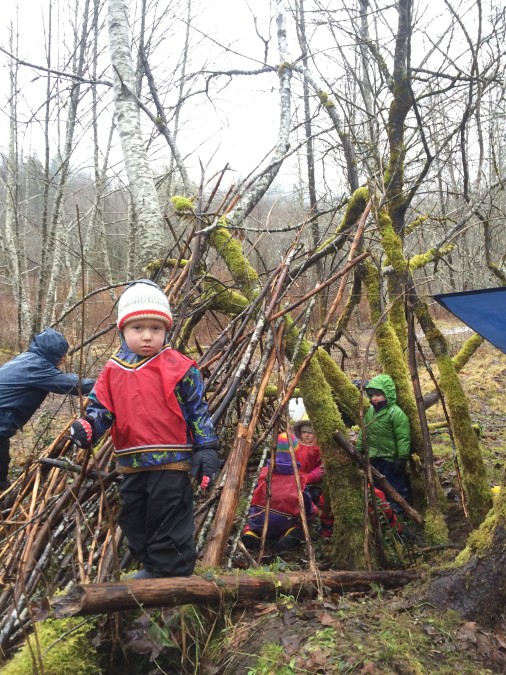 Fin has found a stick to add to the fort. Working together to create something builds trust and a sense of accomplishment! 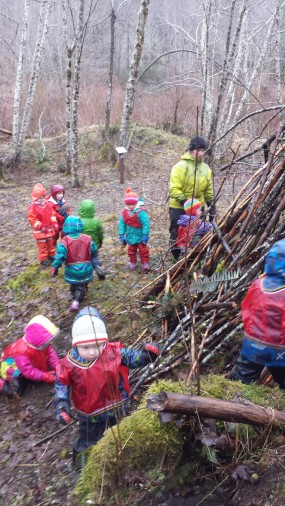 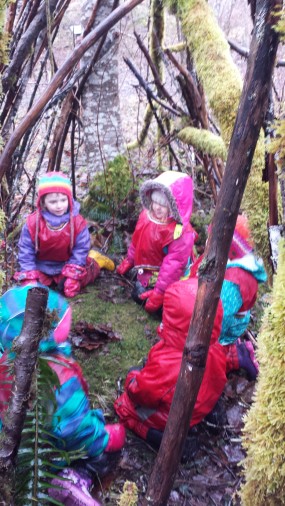 Even meals are shared amongst the friends. This communal ‘meal’ was contributed to with leaves, moss and sticks as utensils. 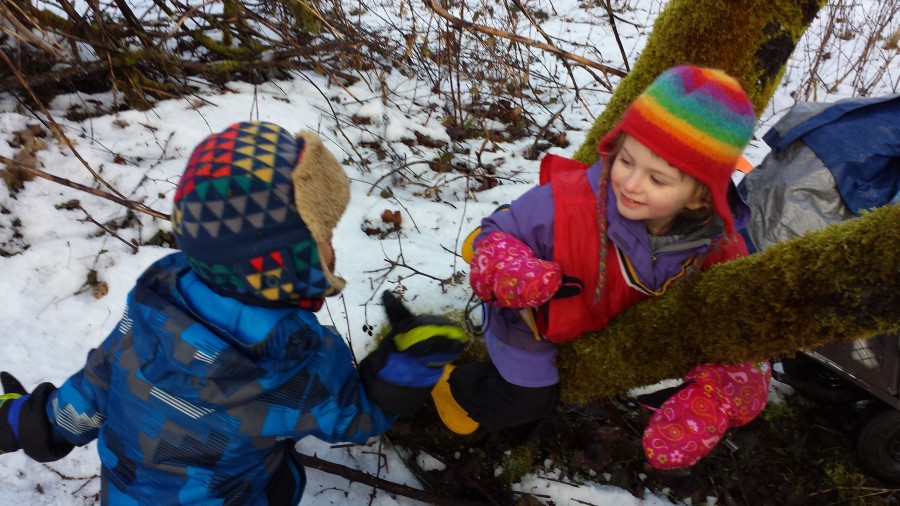 Erik and Sunny share a high five after Erik showed Sunny how he climbed the tree. 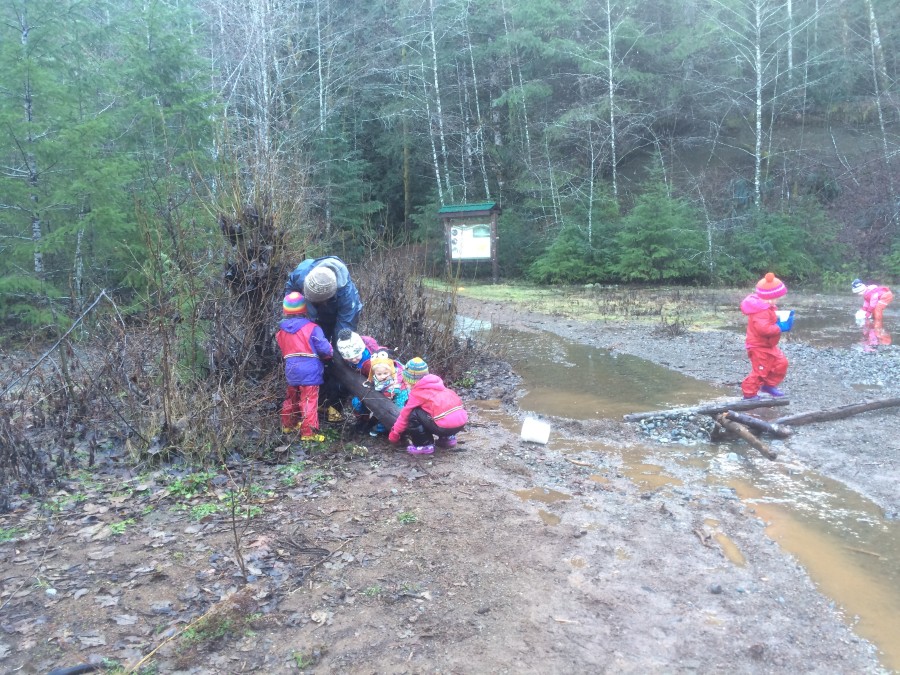 This log was REALLY heavy! In the end we had to just flip it around to get it where we needed it. 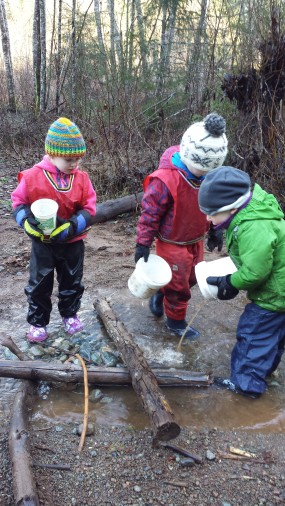 Amelia and Torin are overseeing the actions of their friends to see how they are contributing to the creation of their dam. They was a specific design in mind to block water, where and how that was followed through by all the kids involved. 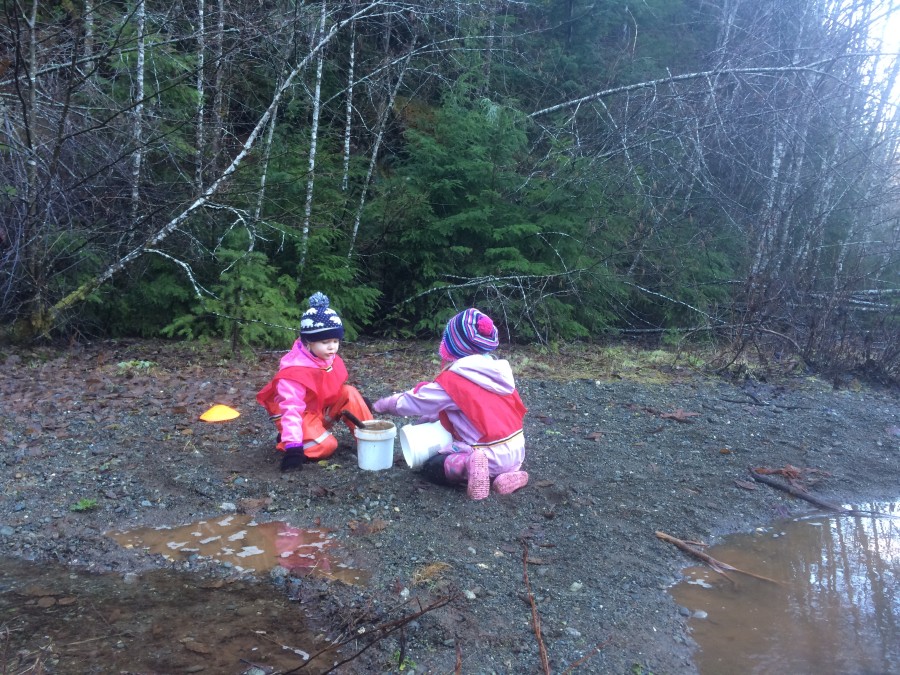 Feathers of all kinds on our field trip to Lazo Marsh Conservation area were seen, heard and some claws were felt! We were so lucky to see Stellars Jay’s, Nut Hatches, Chickadee, Fox Sparrows, Red Wing Blackbirds, Trumpeter Swans, Harlequin Ducks and many more. 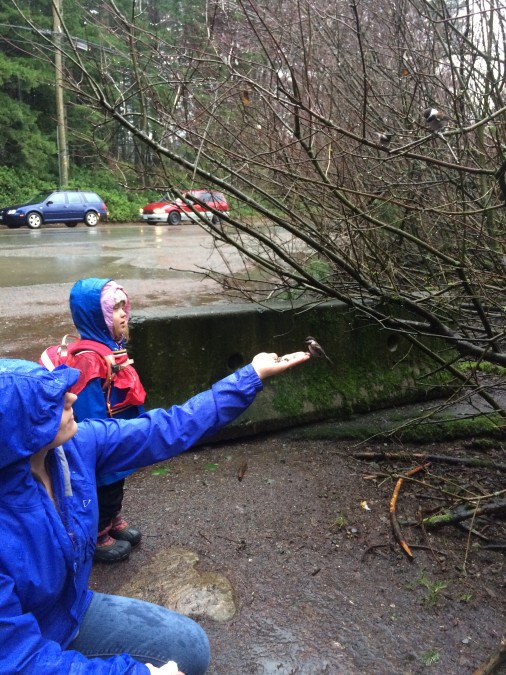 Carly ‘catches’ a chickadee! It was exciting to see them land on people’s hands and inspired the kids to try being as patient and still as they could so they to could have a little bird eat from their hand. 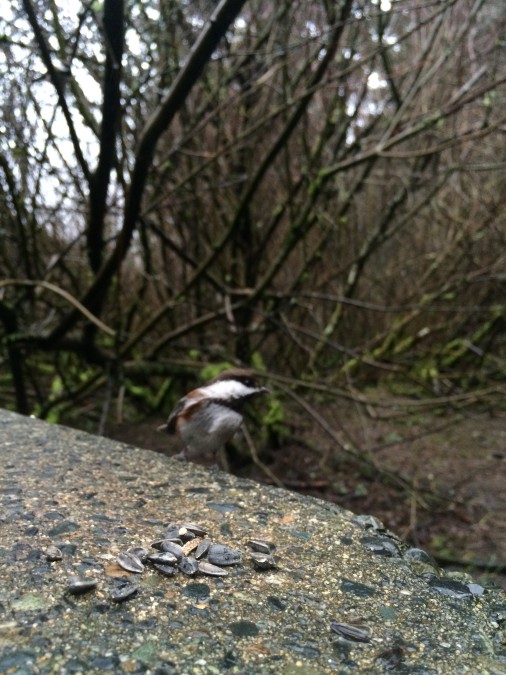 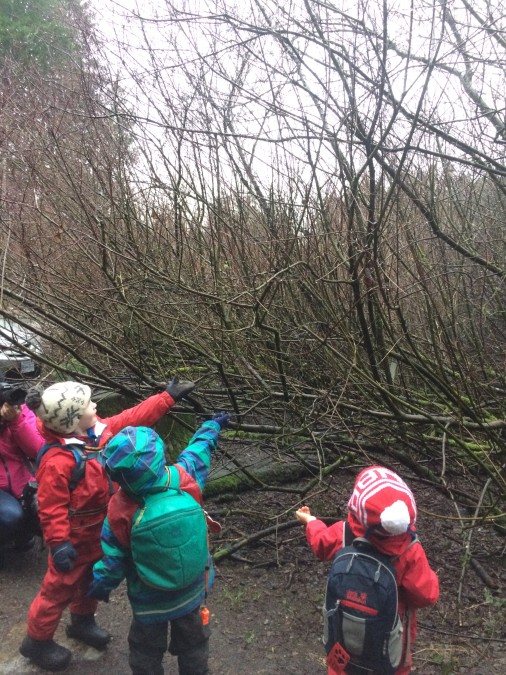 Imitating the stillness of others and trying their hand at having a bird land for a little snack. 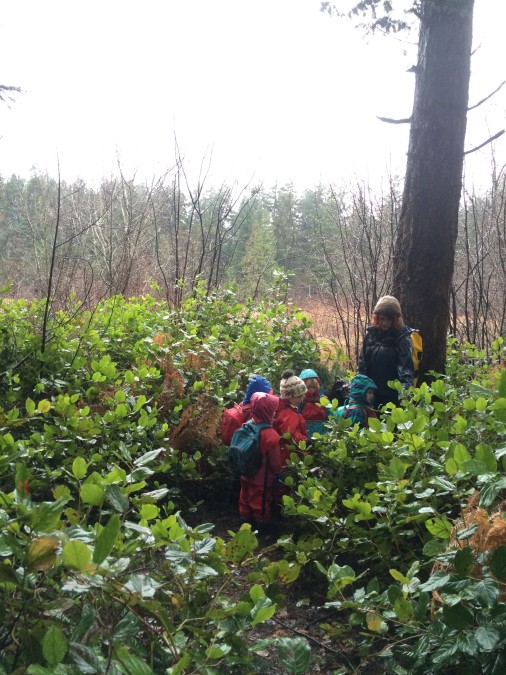 Exploring off the path a little led us to thinking about where the birds live, what they eat, finding feathers and generally just appeasing that need to explore a less used trail! 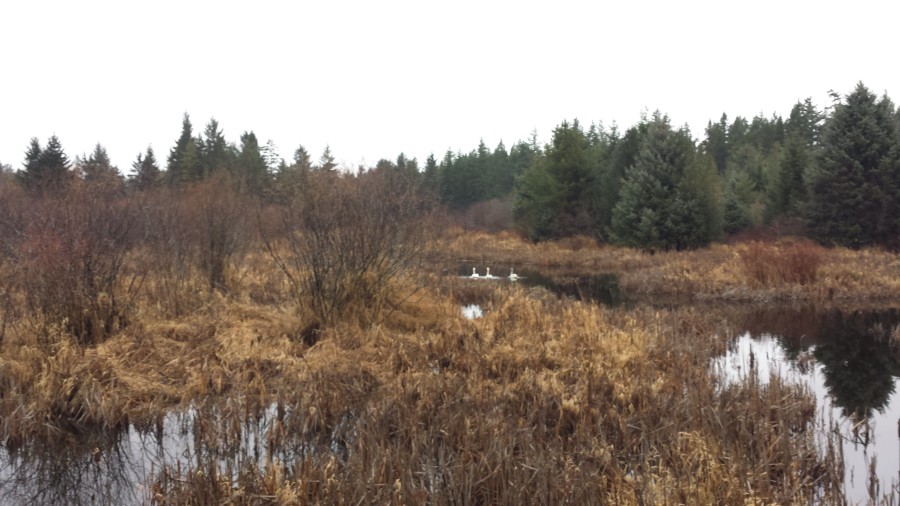 Trumpeter Swans greeted us when we first arrived at the viewing platform. 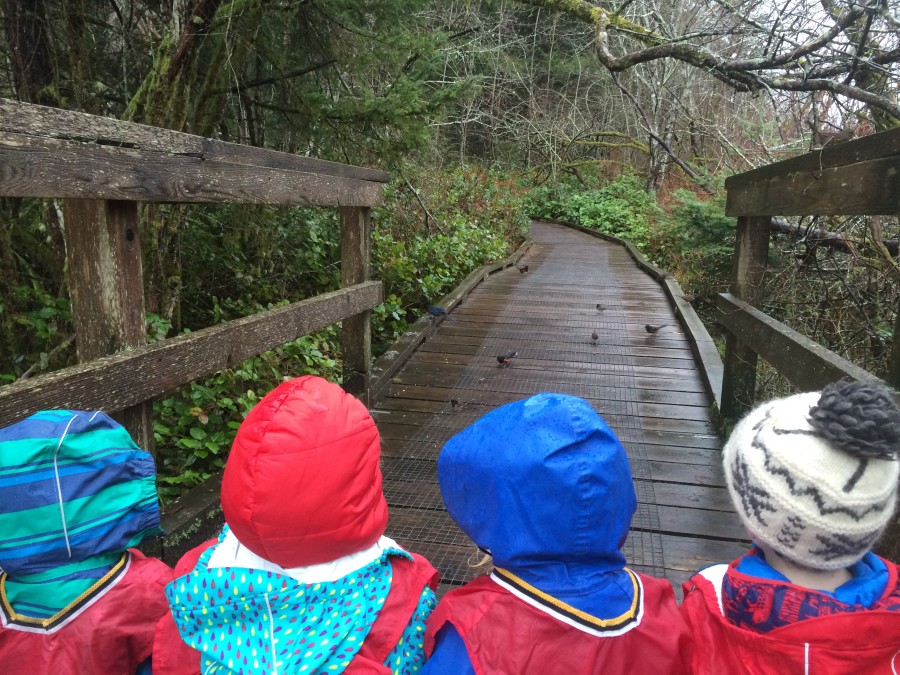 Peering quietly at the birds as they nibbled on seeds was how they observed the birds behaviours and patterns and more. We wondered why they are SO many birds at this park in particular. 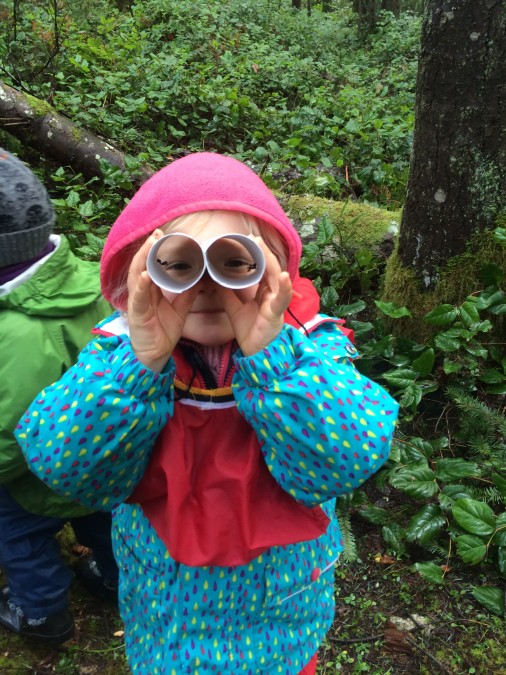 Poppy is peering through her ‘bird goggles’ which they were aptly named, rather than binoculars 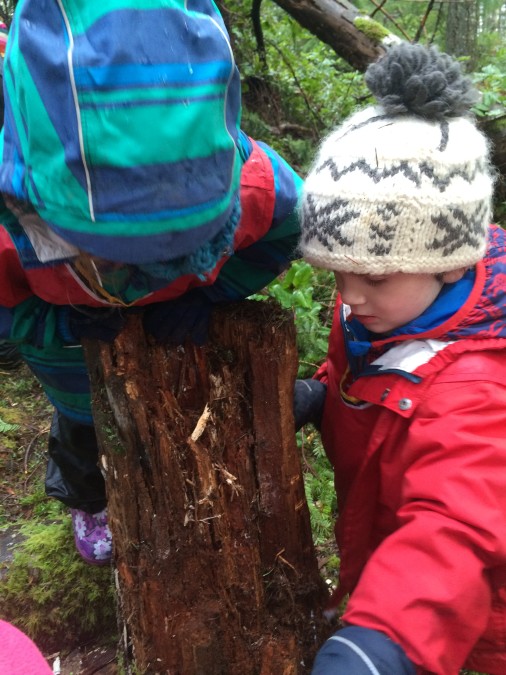 This stump and the story around it was fascinating! The kids quickly realized that a plethora of bugs were living and eating it. It was clearly their home. Some hcildren tried to protect the bugs’ home while others wanted to destroy it – or was it speed its disintegration? 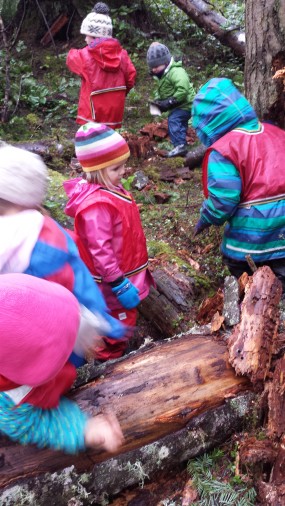 So while the stump was being broken down, some girls decided to build a bug home instead from pieces of bark and wood. A positive solution to their upset feelings around the bugs’ home being destroyed. Those quickening the break down of the stump offered that they might build a new home for the bugs too, or that the insects might just if they couldn’t live there any more. Did the amount of dead trees and the bugs that inhabited them encourage more birds in the area? 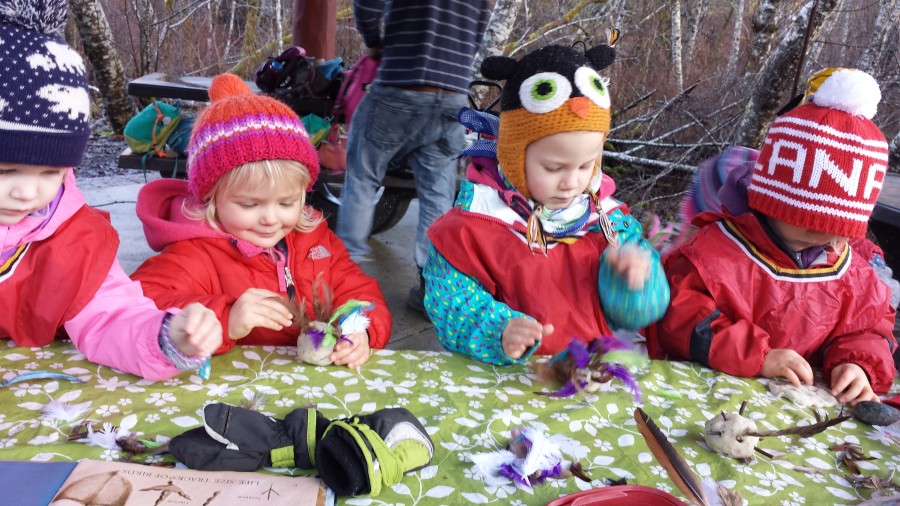 We extended our bird exploration by creating some using playdoh and feathers. They really enjoyed the process of sticking the feathers into the playdoh and considering how to make it bird like. Or did they just enjoy the process? 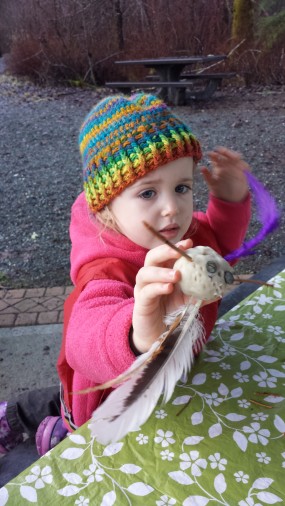 Amelia’s bird creation was complete with rocks for eyes!