The last week of October was spent exploring, discovering and growing, as well as a little Hallowe’en fun, of course!

The week started with some number recognition and hunting for manipulatives from nature to place in the circles.

Spooky fog awaited us as we set out for our morning 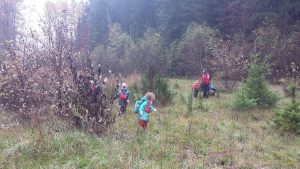 We searched for a way to a new classroom – last week we found it by following a small trail on the other side of the creek, but the wagon would never make it that way. Hypothetically it should be possible to find it by entering the forest from a different direction.

There was a very steep hill, and we needed many hands to get the wagon to the top. In the end we did not make it to our destination, but discovered another classroom to play in instead 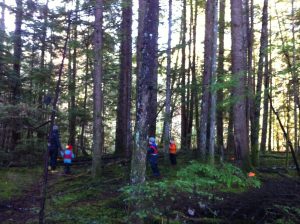 The children were inspired to play hide and seek – you can see some children hiding behind trees, while Heather and Aloe seek them out 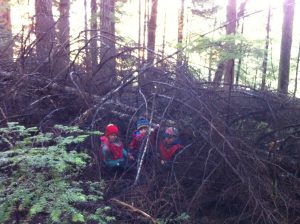 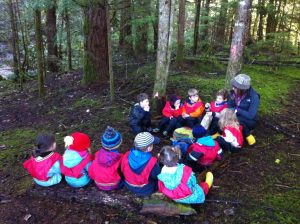 It was a very comfortable Mystery Monday, with log benches already set up for us to sit on

We created a bit of magic using wax resist painting on Wednesday morning. We drew and revealed spider webs, as well as our names.

On our way to look for a way to our new classroom again, we took a look through a spider web 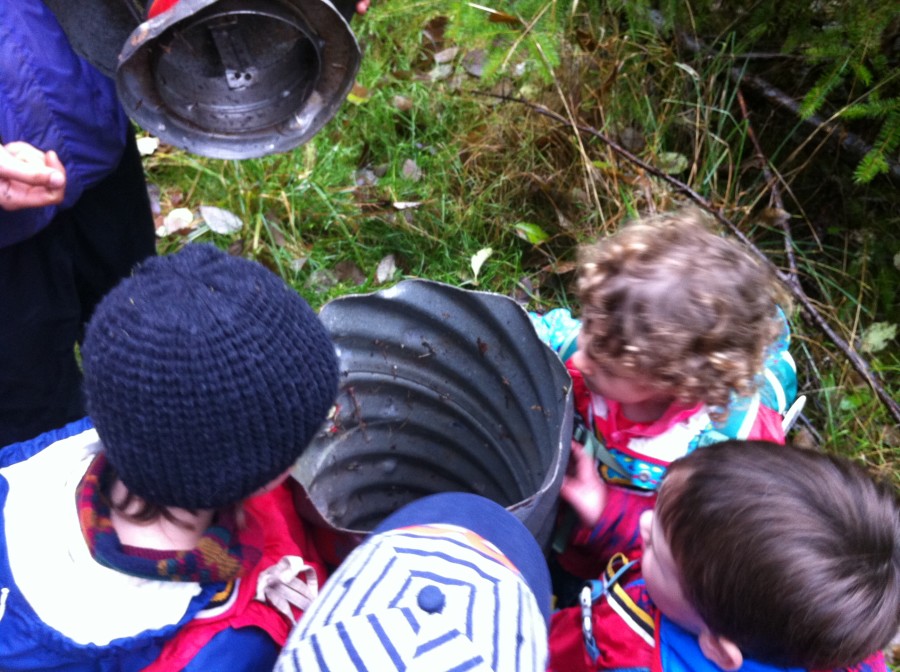 Along the way to finding a way to our original destination – a classroom discovered last week – we discovered many steel artifacts. The children took guesses as to what the items were, and how they had gotten into the woods. In the end the children decided these items were from “the olden days”

This time we were successful and found our classroom! There were some new climbing challenges – here Theo is demonstrating for his friends “put your foot up higher and hang on to the stump like this”

This hole quickly became a “house” for everyone to live in, with toilets and bedrooms for everyone. A lot of role play was involved, including babies, mothers, dads, grandmothers and uncles. 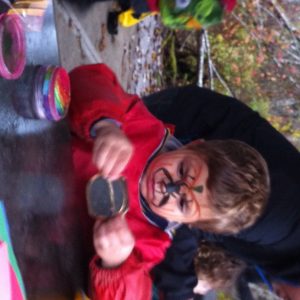 Friday morning the children were greeted by witches and a bear – a face-painting bear! Dawson is admiring his spider on a pumpkin

Kieran is carefully watering some small mushrooms on this rotting log with water collected in the creek and hauled lovingly up the hill.

Just below, Dawson discovered a hole where the water could be put directly into the Earth 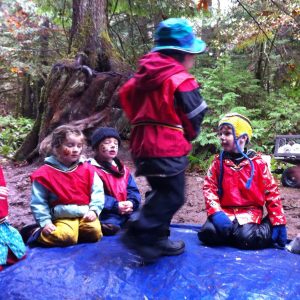 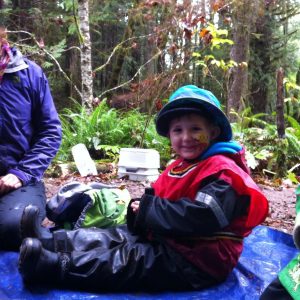 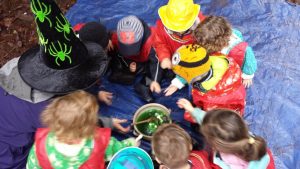 After reading “Room on the Broom”, the witch helped us make our own magic potion, Heather brought swamp water from her house, the children all found something in nature to throw in, and Alix brought bones for everyone to add. 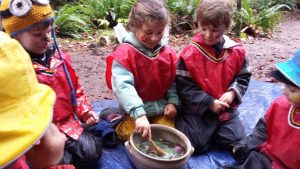 We each took turns mixing the potion up “1, 2, 3, 4. Mix, and mix, and mix some more. When this song is done, you can pass it to your friend”. The bubbles were intriguing and we noticed a mist coming off of the brew, however we also observed that the brew was cold, not hot. At the end, Dawson wondered why a magnificent broom did not arise, and after thinking awhile he realized that it could be because in the book the witch used a fire, or maybe because in the book it was a real witch making the brew, not a teacher dressed up like one! 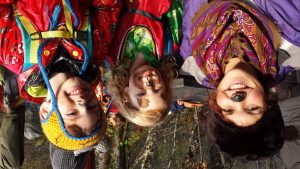 The three bears back at the pavilion – another great week!