What I noticed this month by Heather:
Watching children who go from strangers with one another, to friends playing with one another, and then learning from one another, you know you’ve reached a pinnacle time of the year. It is pure magic to see children use advanced speaking skills to share their knowledge and understand ing of the world. From identifying young sprouts to explaining how to do hand-over-hand raising of a bucket, this group has really excelled in communicating and working as a team. And it comes when forest life is about to explode and each child’s previous experiences with Spring come to light. Whether from gardening, time spent outside just playing or doing activities, each child brings a wealth of experiences to our program. Without prompting, they will also share their skills on preparedness, safety and group cohesion with one another. They helped each with their backpacks and lunch containers consistently this past month. They reminded each other how to participate or showed each other how to be accommodating and work collaboratively with the group. With group cohesion so strong like this, we can slowly challenge ourselves and learn more, all the while finding more time for the observation and appreciation of nature. An act of learning in and of itself. I’m so grateful to all the families who have joined us in this journey so far. With Spring on the horizon I am excited to see where we’ll go from here!

What I noticed this month by Alix:
Signs of spring have slowly started showing themselves around us in the forest. There is a definite feeling that we have passed through the hardest weather and most challenging days. It seems that the children can feel this as well, and the spring energy can be seen in them too. Friendships that have been developing since September are becoming solid bonds. As the weather gets warmer, families are arranging play dates and enjoying the lighter days. During school time, children have requested we return to hand holding (which was abandoned when bulky mittens made it too hard), and hugs are exchanged on a daily basis. It is fun to watch this class grow closer and closer together – they really care for one another, and the absence of any individual is always noticed by the group. My heart sings when I see that these children who were strangers to each other a short 6 months ago, have become a community!

Tapping Maples for Sap
Early in February, on the perfect frosty morning, we headed out just past our Maples classroom with Heather’s partner Ben to
‘tap’ maple trees. Ben explained to the Roots how trees take nutrients and water from the earth and draw it up through the trunk and branches to help it grow and stay alive. The combination of nutrients and water is sap, which we were extracting out the tree through a spile drilled into the tree that would spout out sap into a jar. In the end, enough watery sap could be boiled down into maple syrup! 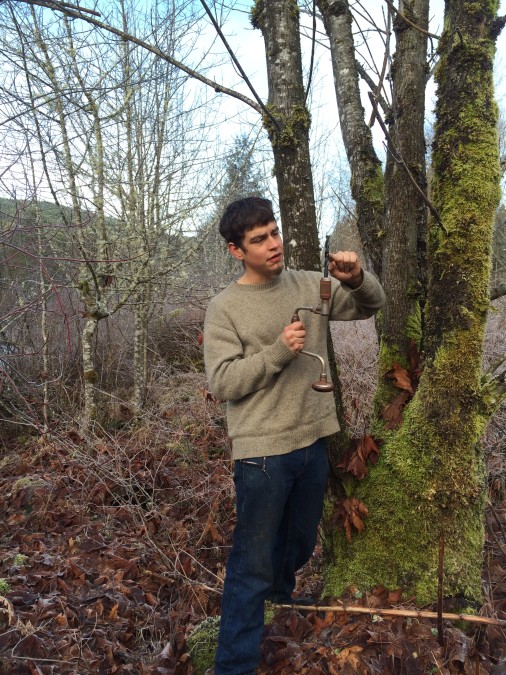 Ben shows us how deep we can drill into the tree for it be safe and to get the most sap. The children were very concerned about hurting the tree! 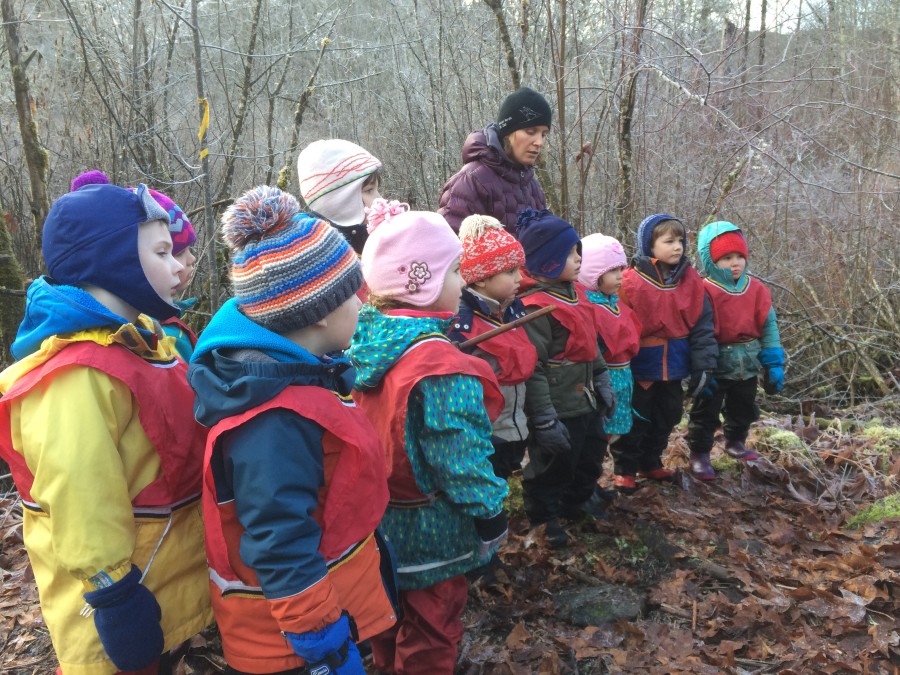 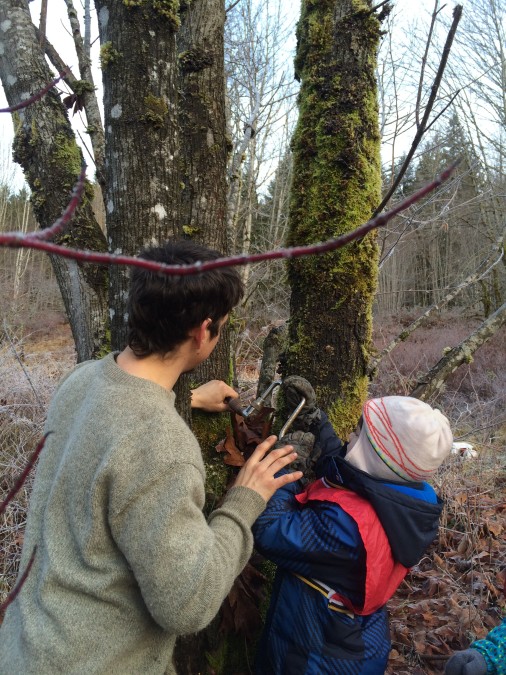 Ben shows Theo how to drill into the tree slowly, and at an angle so the sap drip downwards. 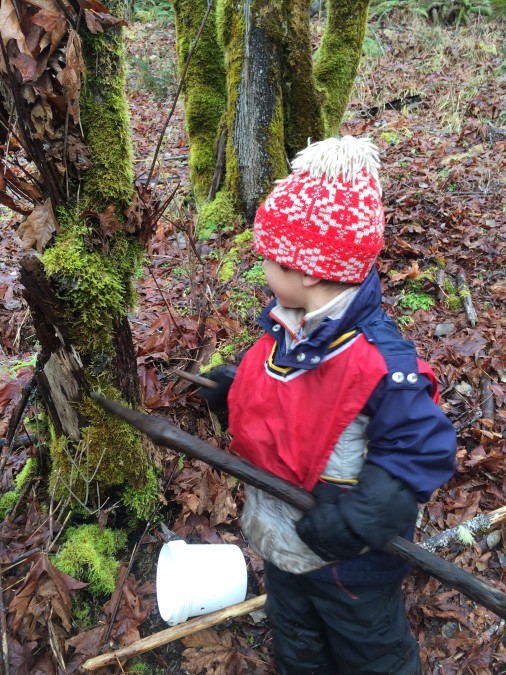 Dawson re-enacted the maple tapping with a stick. He drilled into the positively identified maple tree, added an imaginary spile, and found a bucket to collect the sap. 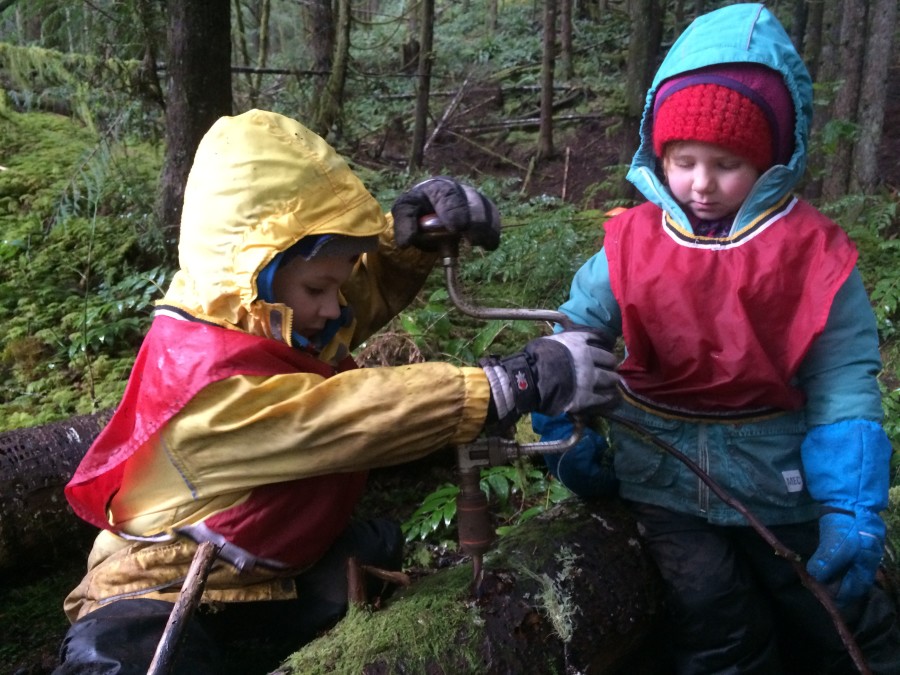 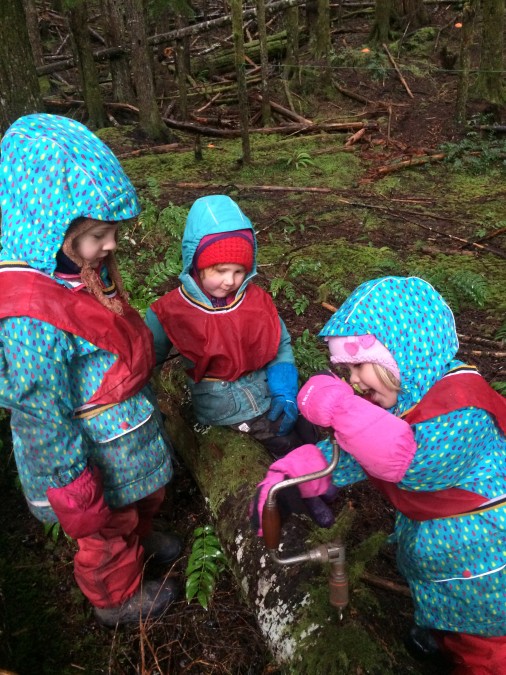 Jaylynn is trying out the hand drill on an old log, like we used when did maple tapping earlier that week. 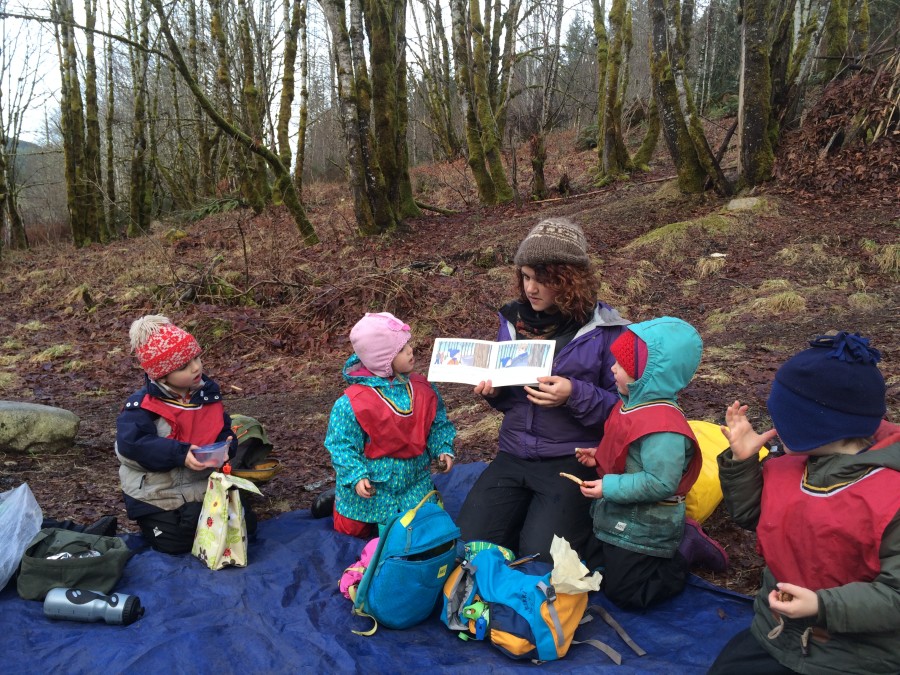 We read a book about maple tapping out east on sugar maples, which is a similar process to tapping our big leaf maple. 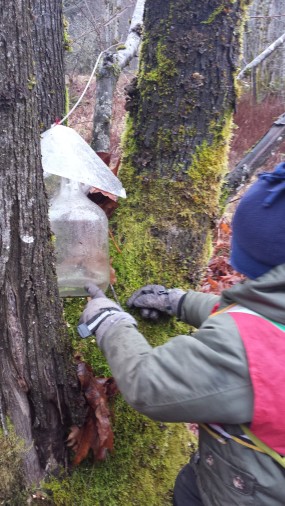 Nolan checks on the quantity of sap after a few days. 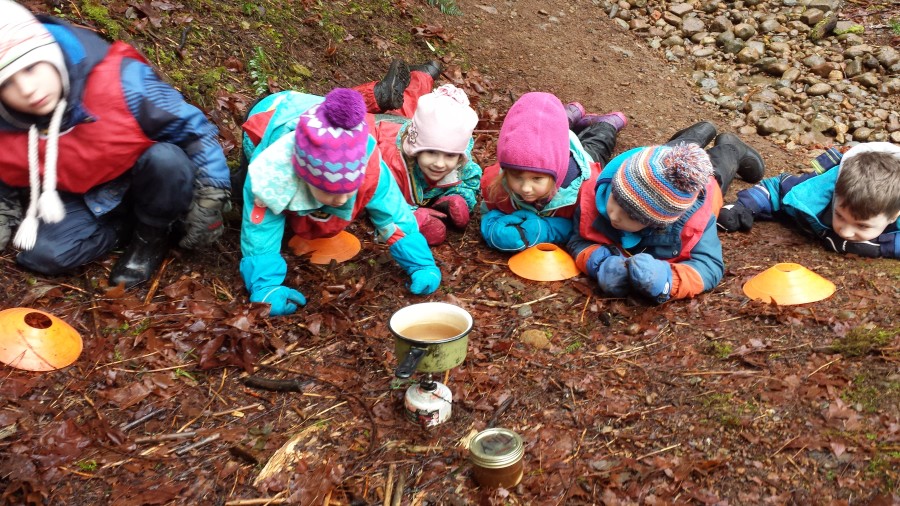 A few weeks later, we boiled down some of the sap we collected (and Heather and Ben collected previously) so we could watch the whole process. It was also a study into the states of water as we knew the water level went down but the sugar content went up as water left the pot as steam 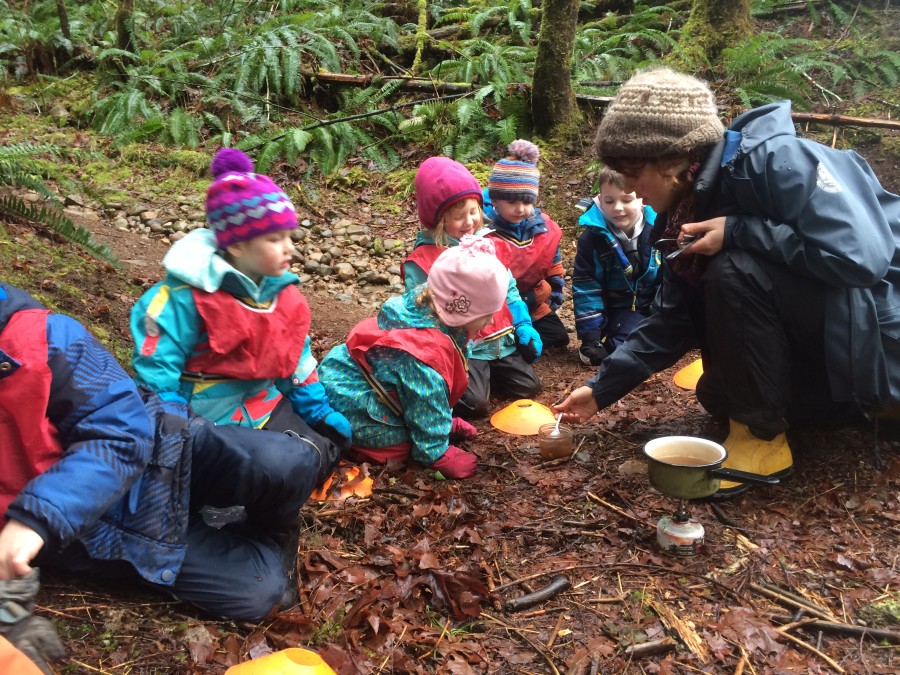 Testing out some pre-boiled down homemade maple syrup. Those who tried it, loved it! And asked for seconds

Sticks and Shapes
Our themes this month really flowed into each other quite seamlessly. We started out with sticks, which are always incorporated into play in our classrooms, but at the pavilion they were used on a smaller scale. Many qualities were noticed – colour, length, thickness, and these observations were brought to the classroom as well. We used sticks to touch briefly on shapes, which led to our Valentine’s  craft. The Valentine craft led to discussions about friendship, love and other emotions. 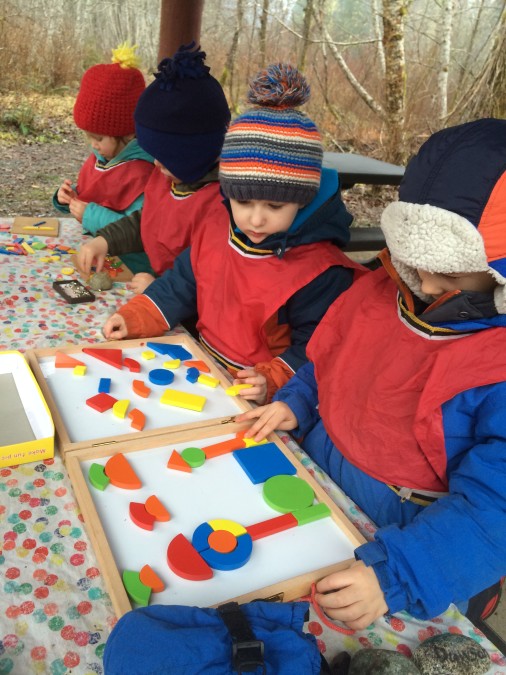 James spies on Kieran’s house made of many different shapes. Learning from one another is a common occurrence at pre-school. 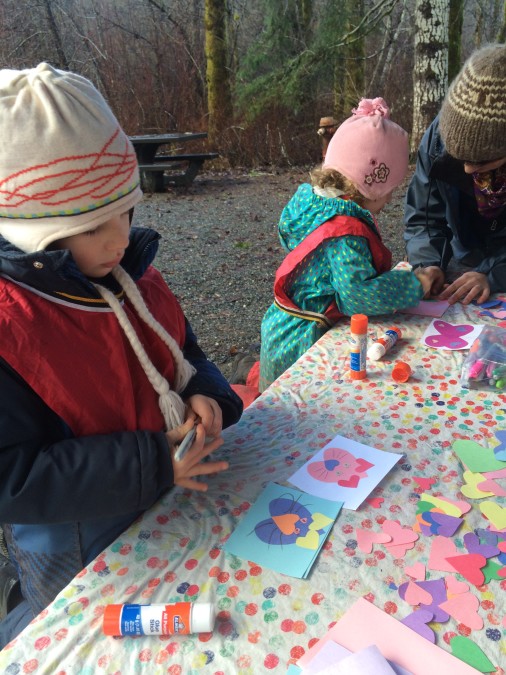 Theo also worked with heart shapes to imitate the cat card made by Alix. He compared them and found he’d successfully re-created the cat face! 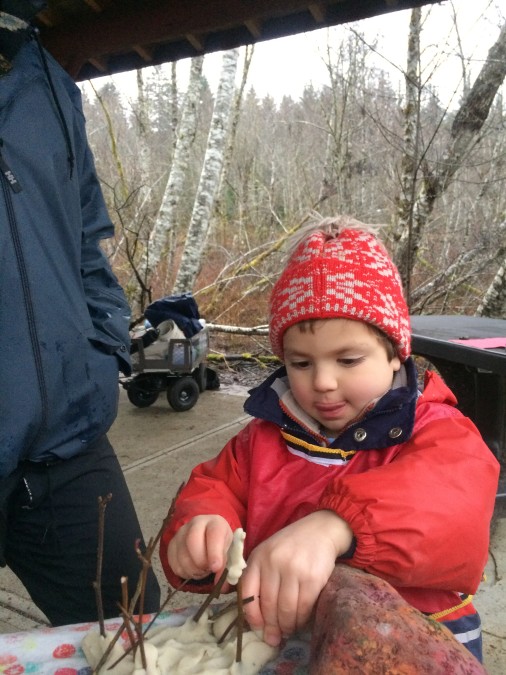 Dawson used playdoh to connect his sticks and build upwards. 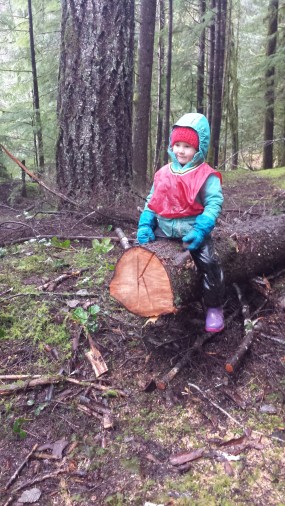 Aloe found a log with a shape cut into it, its the shape of the letter K! She also wanted to count the rings on the tree and we found it to be about 80 years old!

Emotions
Through creating faces, reading books about it, and practicing understanding during the day, the children learned about different emotions, how to recognize them and some appropriate reactions to different emotions. During our day we face social, physical and environmental challenges. We also enjoy funny, silly, exciting and calm moments too! 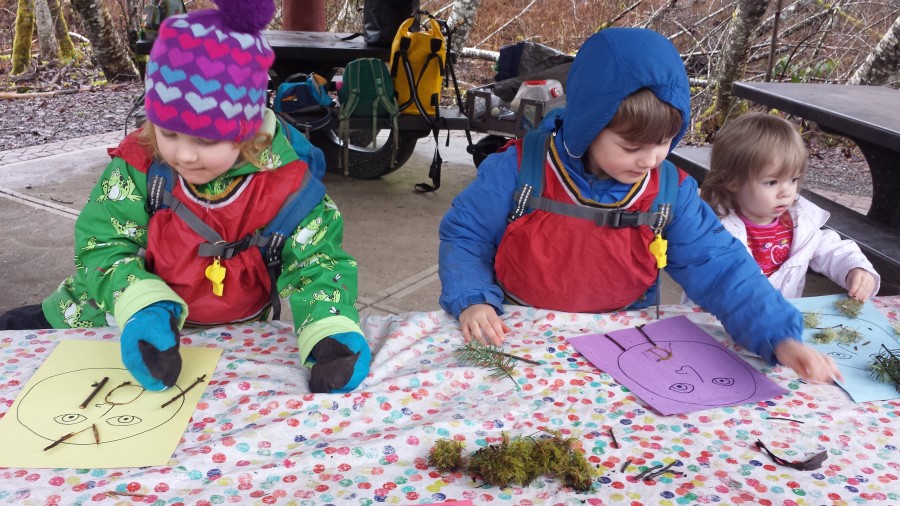 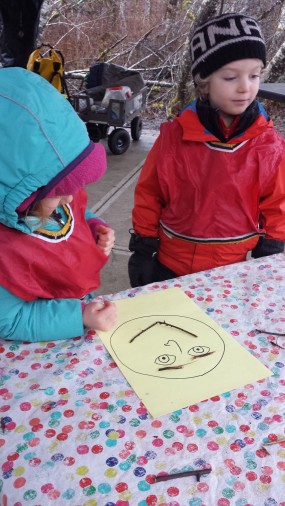 Jared looks on as Aloe makes a V-shaped smiley face 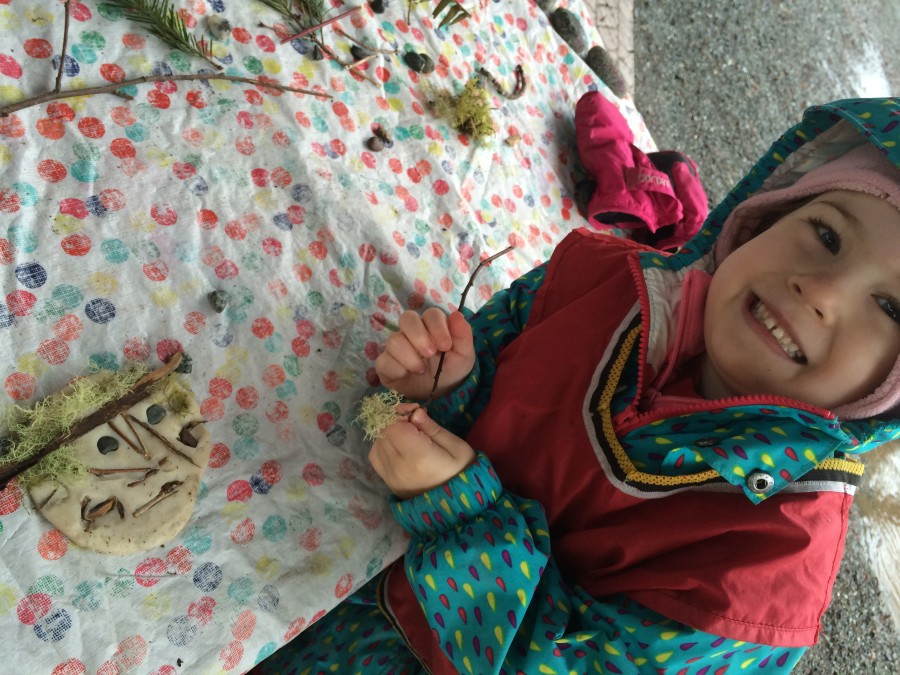 Juniper makes a smiley face, to compliment the funny playdoh face she’s made! Natural materials like moss, lichens, rocks and sticks made for interesting expressions. 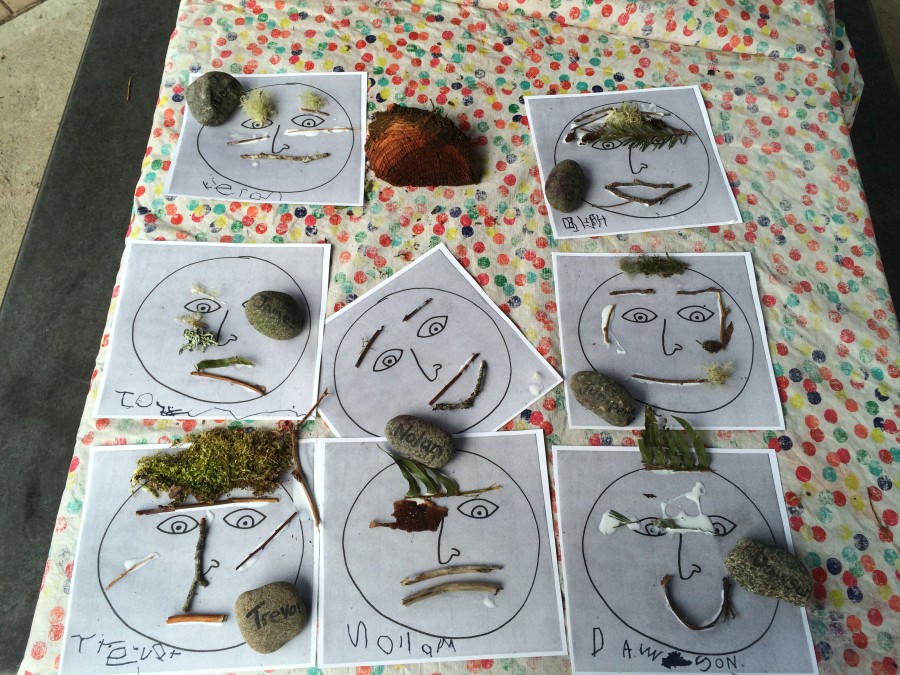 We made our own faces to take home. Check out the variety of facial hair, hair, expressions and accessories!

Discoveries and Curiousities
Everyday this month we found something that the whole group would run over to see, ask questions about, or try. Sometimes its a worm, bug, interesting sticks or bird in the sky. Other times we decided to try a new path, or climb a new hill or stump. In these moments of awe and excitement we found the children we’re exceptionally open to thinking differently about the new thing. We will define safety guidelines, or discuss how to be sensitive to an organism’s needs. 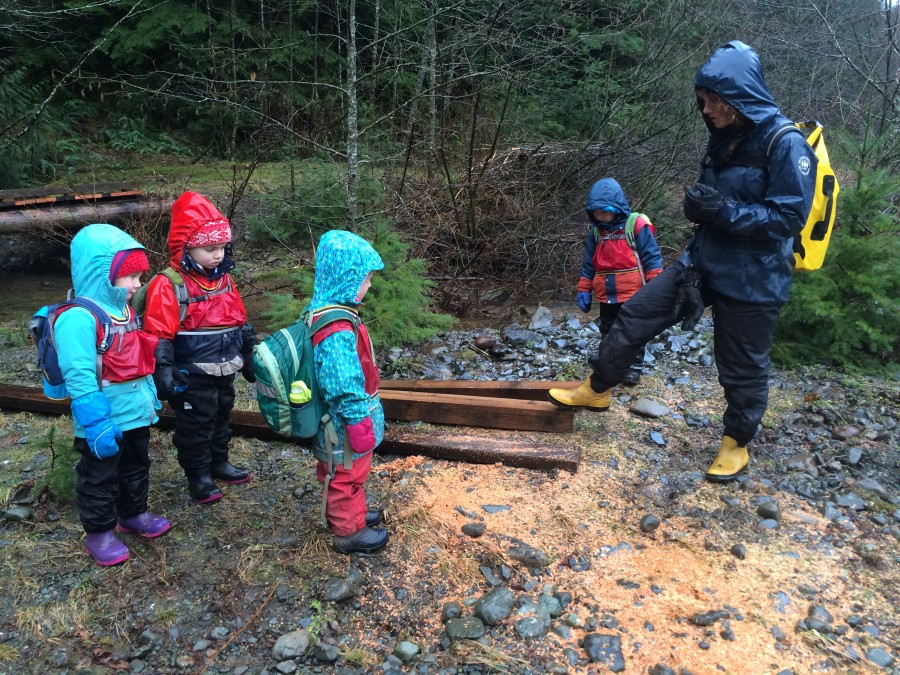 On the way to our classroom that used to require us to ford a stream, there was some construction on day. We anticipated that the very old and un-usable bridge would be fixed or remade, which it was! Very fun to guess how they made it and then later, to use it. 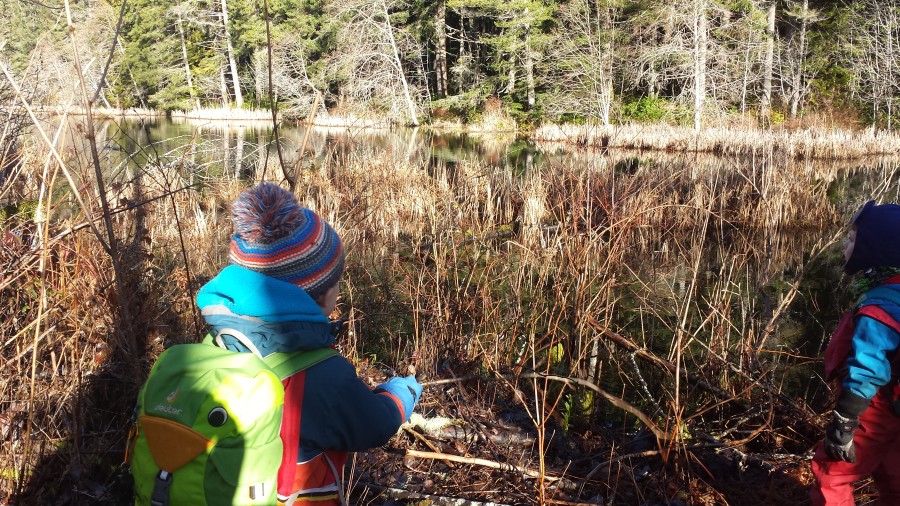 On our way to the bridge classroom we saw many ducks. Here, Trevor and James identified the green head on one duck – the Mallards. There are a few pairs. We enjoyed counting the ducks and then we thought they might be nesting soon, so we should be quiet and respectful as we passed by their home. 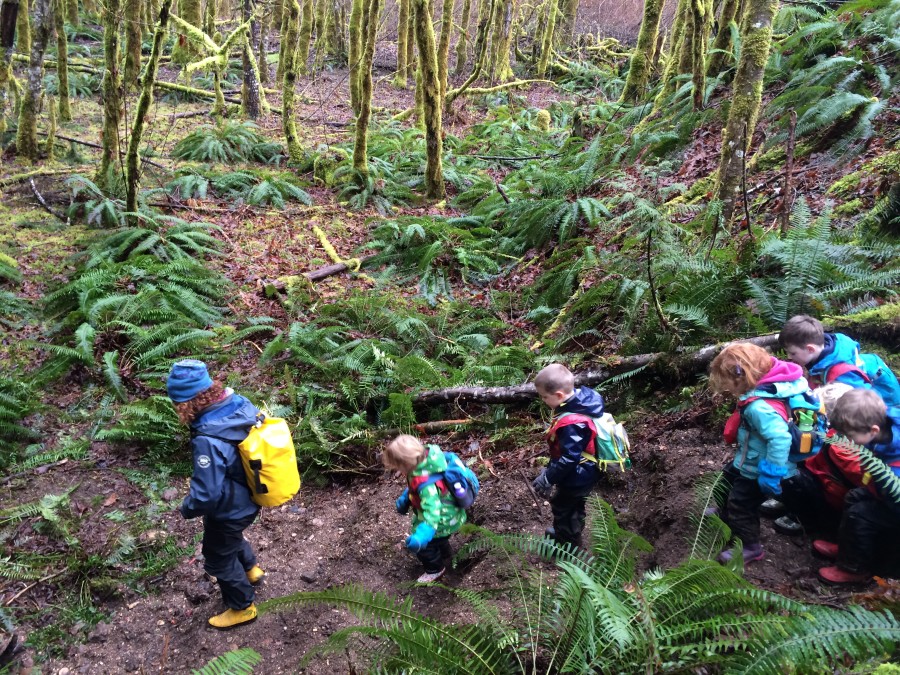 One day we noticed a little hill of the path, and on the other side were some stairs cut into the dirt! After the suggestion that a teacher go first, the kids followed down these oversized steps into a never before (by us) discovered area! 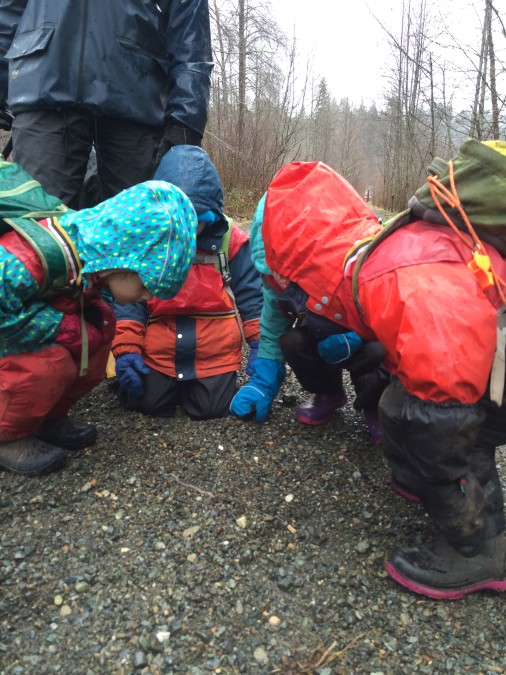 A wriggly worm is always an exciting moment! This one was right in the middle of the path, so we picked it up and moved it to the side of the path to prevent it from being stepped on!

Team-work and collaborative play
Individual abilities really shine when the group took on self directed play and activities this month. As evidenced through digging and dumping projects, pirate play, and more, we saw the group grow as a whole team with different interests who worked together. This kind of inclusive play also highlighted how the children recognized their own strengths and those of their peers. Extending empathy and acknowledgement of each other’s abilities are sure signs of social development! 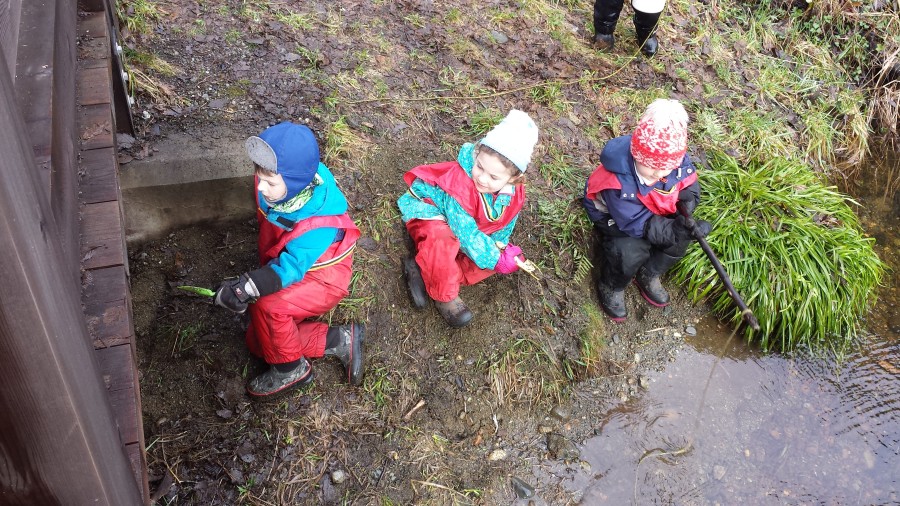 Digging and communicating at our bridge classroom, these three friends showed a shared understanding of space. How much space each person needed to do their activity and what kind of material they were working with was split up based on their interests as well. 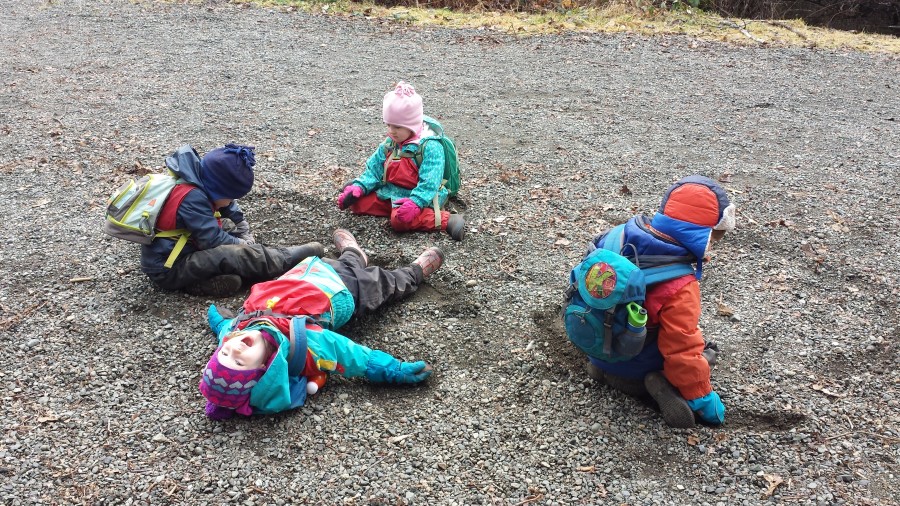 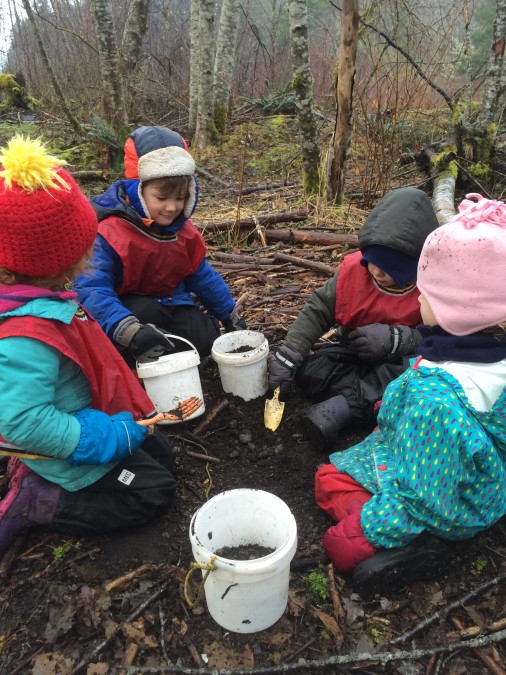 Here the kids are either filling up their friends buckets with dirt, or taking the bucket full of dirt and dumping it elsewhere. This was also a solution to the limited shovels available too. 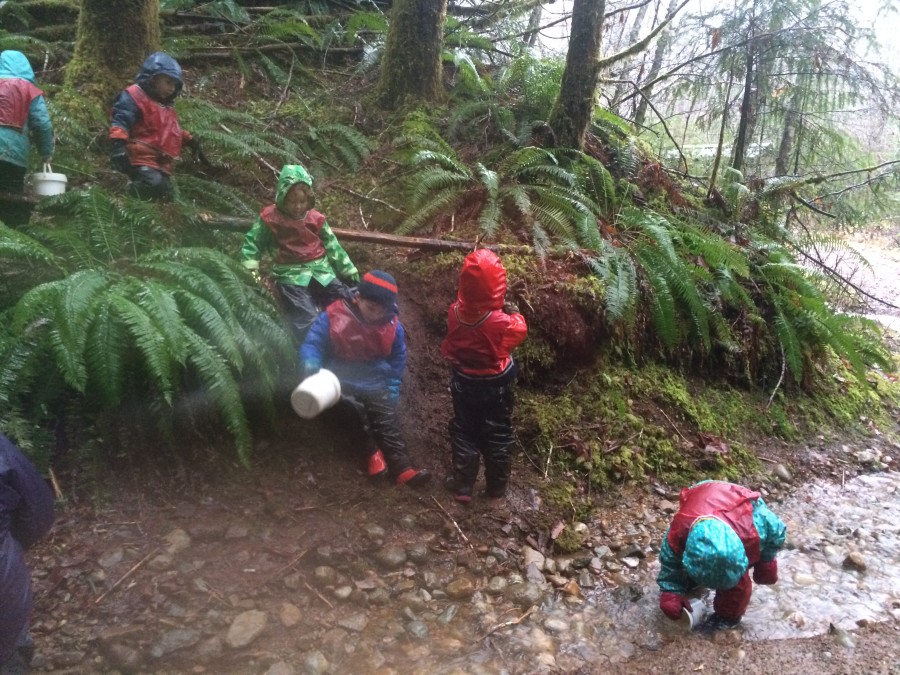 Firefighting and dam building and follow the leader. Some kids would fill up their buckets to go put out a fire, then follow another kid – often up and down slippery slopes – so they could all put out the fire together! 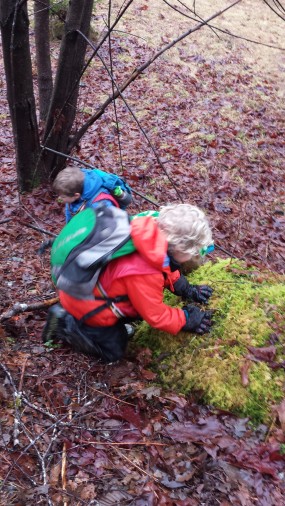 Sometimes helping out can mean showing a friend how to get a hill easier. Here, Jared is showing James a part of the slope which is easier to climb and still gets you to the top!

Nature Nerd Bonus!:
Alix and I have positively identified some Western Yew (Taxus brevifolia) trees in our forest! One day, Theo asked ‘What kind of tree is this?” about the ‘red climbing tree’. I had always thought it to be a bit obscure which type of tree it was as it is covered in moss and half dead. But his question got me thinking, hey, maybe it’s an elusive Yew! Here’s some close-ups of our red climbing tree: 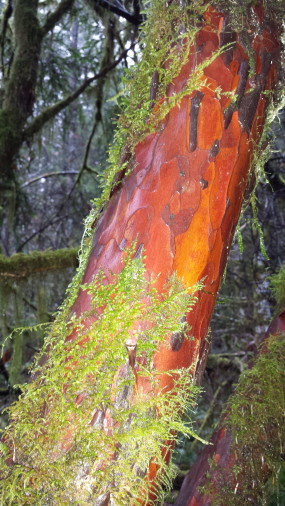 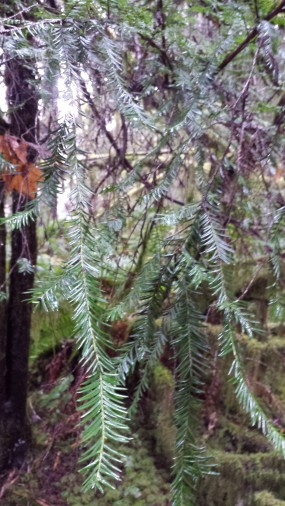 The flat, pointed tip needles of the Yew